Today I have the pleasure of being on the blog tour for the marvellous book, Calling Major Tom, and if that wasn’t exciting enough, David himself has been kind enough to answer a few of my questions 🙂

It’s no secret that I absolutely loved this book, so I’m curious, what inspired you to write Calling Major Tom?

The actual catalysts for the book have been discussed several times, but it’s worth mentioning briefly that in December 2015 the astronaut Tim Peake made a wrong-number call from the International Space Station, which I thought was incredibly funny and also lit the touch-paper for the basic idea of the novel — what if an ongoing conversation occurred between an astronaut speeding away from Earth and a family back on Terra Firma? The death of Bowie a couple of weeks later cemented the idea of the astronaut being something of a misanthrope who was quite happy to get away from it all — literally — and of course, being a middle-aged British man, he’s obsessed by music. But I also wanted to write something that was hopeful and funny and sad at the same time, and the pieces all seemed to fit together quite suddenly.

This book has some fabulous characters. How did the characters develop while writing this book?

Like they always do… they took on a life of their own. Oh, I know that’s such a dreadful writerly cliche, but it’s also a little bit true. I tend to start off with a rough mental outline of my characters and then in the first draft give them a few chapters to develop. They always do surprising things, or take you in directions you never anticipated… again, I know this is the sort of thing writers say a lot, and sometimes I find it a bit cringeworthy, as though it’s like this special bit of authorly magic, and that sounds a bit lofty, but characters have to grow for the reader during the course of a novel, so at the same time they grow for the writer as well. So with Thomas, I knew he was grumpy and curmudgeonly but I also knew that things had happened to make him that way, and that was the fun of the writing… finding out why he was the way he was.

Who was your favourite character?

I think my favourite character is Gladys Ormerod. She’s funny, but naturally so… she doesn’t do gags, the comedy with Gladys comes from what she says or does. But as she’s suffering from dementia, it’s crucial that we’re never laughing AT Gladys, we’re laughing with her. She’s also very loving, she’s feisty, she’s wise and she’s human, I think, which means she’s sad as often as she’s happy, just like everyone else.

Oh, I have to agree, David. I really connected with Gladys. She made me laugh so much. She’s such a funny and quirky character 🙂

Did the characters and/or book turn out different to what you initially imagined?

I think it’s fairer to say they developed and took on attributes and depths I didn’t anticipate in those early days when I just had broad-brush ideas about who they were. Some characters who were really just cyphers before I started writing did get more dimensions to them as the story progressed – Claudia, the PR woman at the British Space Agency, for example. And one character who was purely meant to pop in to one scene to give Ellie someone to talk to — that was Delil — I ended up liking so much that I had to give him a bigger part.

What message do you hope your story sends to readers?

I never set off to write a book with a message… I think that would be a bit weird, and polemic, and not true to life. But it’s only at the end when everyone’s done their bit and had their say that you start to think about what the book’s really about, and sometimes it takes for readers to decide that. I think if someone takes away from the book that there’s always hope, however bad situations seem, then I’d be happy with that.

Perhaps you could give us a hint of what book you’re working on next?

Currently powering on with THE LONELY HEARTS CINEMA CLUB, which is to be published by Trapeze in 2018 and is about what happens when a group of students take up some empty rooms in a rather quirky old folks’ rest home on the Lancashire coast. There’s a bit of a mystery vibe going on there, there’s hopefully some funny stuff and some tragic stuff, just like CALLING MAJOR TOM, and I think people are going to like it… hope so, anyway!

Ooh, I’m loving the sound of that, so that’s something for me to look forward to next year 🙂 Good luck with it, David. In the meantime, I hope Calling Major Tom continues to be a huge success, and thank you for taking the time to answer my questions.

CALLING MAJOR TOM is a heart-warming and ultimately life-affirming story of a man who has given up on the world… but discovers in the most unlikely way that it might not have given up on him.

The grumpy next-door-neighbour who complains to the Residents’ Committee about the state of your front lawn. The man who tuts when you don’t have the correct change at the checkout. The colleague who sends an all-company email when you accidentally use the last drop of milk.

Thomas is very happy to be on his own, far away from other people and their problems.

But beneath his cranky exterior lies a story and a sadness that is familiar to us all. And he’s about to encounter a family who will change his view of the world. 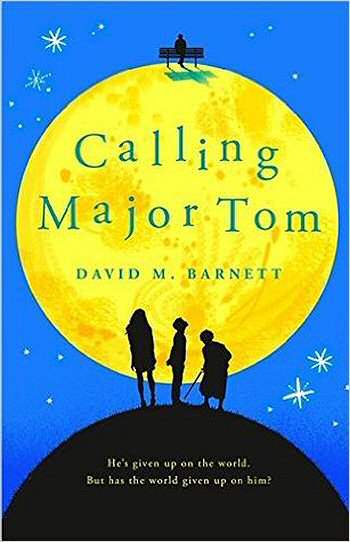 I loved everything about this book. The characters were wonderful, and by the end of the book I loved them as if they were my own family.

Gladys made me laugh so much. She’s such a funny and quirky old lady.

“Gladys might read her book if she can find it. Or remember what it’s called. Or even what it’s about.”

This had me laughing out loud, as I know this situation all too well. Sometimes I find it hilarious that I’m even a book blogger, seeing as I can’t remember a book pretty much as soon as I’ve finished it, or even while reading it on some occasions, come to think of it. Thank goodness for my scribbles in notebooks.

I loved that Thomas was a grumpy man trying to escape the world and the people within it. His adventure reminded me of the shed my dad built for my sisters and me when we were young. I’ve always been happy in my own company and I used to go time travelling in it, using a broken radio and an old keyboard. Oh, what exciting adventures I had. Now I’m a grown-up I just have a potting shed, which is somewhat less exciting.

Experiencing the friendship develop between Thomas and Gladys and her grandchildren, James and Ellie was so incredibly endearing. I’m trying not to cry again at the thought of it. I can still feel it pulling at my heartstrings.

Calling Major Tom is a funny, sad and emotional story of love, loss, hope and determination. If this story teaches the reader anything, it is to appreciate what you have and never give up hope or trying to become a better person.

“One man went to mow, went to mow a meadow…” I’ll leave that with you, because I’ve had it going round in my head all day. I had actually forgotten it existed until reading this book.

The best advice I can give you today is to buy this wonderful book!

Where to find this book: 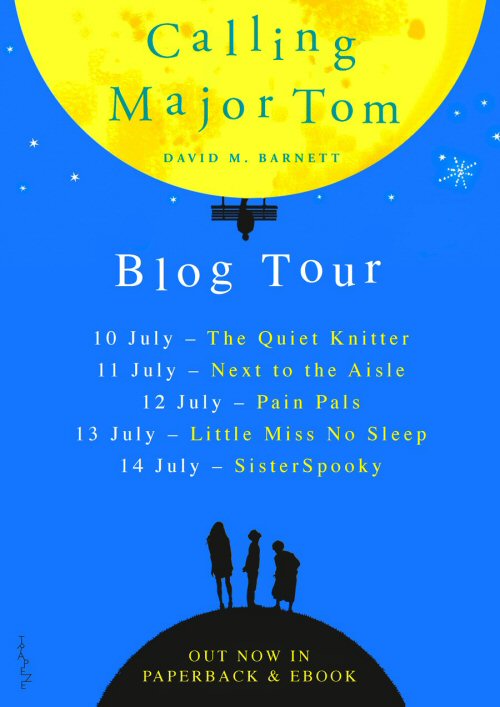 LittleMissNoSleep Daydreams of Books do not share personal information with third-parties nor do we store information we collect about your visit to this blog for use other than to analyse content performance through the use of cookies, which you can turn off at anytime by modifying your Internet browser’s settings. We are not responsible for the republishing of the content found on this blog on other Web sites or media without our permission. This privacy policy is subject to change without notice. You can unsubscribe from email notifications or unfollow this blog at any time by following the links in the email.